IT was just a few minutes to 13.00hours and the service of songs was in session when our chartered Caverton helicopter landed in ancient breezy coastal community of Okoroba, hometown of Mr. Oronto Douglas, a senior aide to President Goodluck Ebele Jonathan.
I had flown with my Uncle, Engr. Mayne David-West, Principal Consultant of Pearl Consultants, and George Kerley, Coordinator of The Jonathan Project and an unrepentant crusader of the president.
We proceeded directly to the venue of the Service of Songs. It was a ten minutes walk from the school field where the helicopter had landed, and it offered an opportunity to see the sprawling ancient community and the new developments taking place. The people were very happy.
They were seeing new faces – ministers; governors; commissioners; corporate executives and citizens they only read about and saw in the news walk on the new rigid pavements of their community. 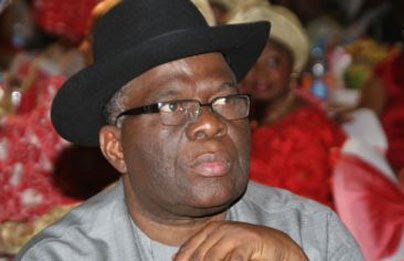 I think above all, they wowed at the Nollywood stars who dazzled the natives to disbelief. Ramsey Noah, Rita Dominic, Segun Arinze et al, then the big masquerade – Kanu Nwankwo was right there. I said to myself, the children of Okoroba Town would be inspired by the time the body of Pa Douglas is finally laid to rest.
In this flourish and fanfare, he sat quiet, listening to the incisive message delivered by the Reverend Ayo Oritsejafor.
He seemed consumed by the pastor’s deep rhetoric about how ephemeral life was, and how wealth and money were necessary vanity but how a life well spent is eternal in value. Still, I interrupted his intense engrossment.
He was excited to see me. We exchanged pleasantries and he asked that I stay around for a chat after the pastor’s message.
I did. The General was a towering man. Dressed in a grey striped French suite and black shoes, I watched him walk in his usual calculated steps as he left the tent to the other tent where the reception for visitors was to be held.
He looked fresh, like he had rested well after his surprising removal as National Security Adviser. His warmth was charming and his humility ever evident. He was led to a roundtable on the first row and he took his seat by his friend Engr. Mayne David-West whom he hadn’t seen in months.
They chatted warmly while they poured themselves a little champagne. He was served soup and he ate light. In about forty-five minutes he was done. Just about then, he receives a signal that the ill-fated helicopter was on its way.

He walked around to the other tables, shook hands and made his way out. He was headed for the helicopter, but he was obviously not in a hurry. He strolled with Governor Patrick Yakowa, a governor whose humility endeared me to him.
Governor Yakowa spoke softly, greeted warmly and smiled like he knew it was a final moment to be enjoyed. We walked ahead of the Governor and the General, and in a few minutes we were all at the Okoroba Primary School field.
There were a few chartered helicopters arriving and taking off. The choppy drone of rotor blades slicing through the air ruffled us a bit. The primary school was sufficiently solicitous of intervention.
The classroom had neither doors nor windows, in fact it looked abandoned. While we stood inside I asked why a primary school in Mr. Douglas’s home would be this wrecked. I called a young man, and in intense curiosity I began to question him.
My findings were that a new primary school was being developed and new community library built and well equipped. I was satisfied, I would have been disappointed.
Plenty caution
General Azazi watched these happen. Now it was time to take him on. I had not seen him since his removal as NSA. He was a deep man, and I was eager to hear him say something. I knew him to be blunt in a very smart way.
He would not say a thing if he had not thought it through intensely. I probed into his period as NSA and asked what his take was on the Jonathan presidency. He had lost no love for the President.
He said …”Ross, the president is very intelligent and smarter than most people know”. He talked about the Boko Haram issue with plenty caution, but was optimistic that the president would check them.
Now, we were joined by the IYC president, Mr. Miabiye Kuromiema, and I surprised the General when I fired: “Sir, it is about time the president threw Mrs. Diezani Allison-Madueke under the bus”.
I maintained that the Jonathan presidency was haemorrhaging severely because of her continued stay as minister. I expected him to say something, his face expressionless, he remained quiet. George Kerley, a known defender of the honourable minister, quipped with a straight face: “Ross, you are right.
It is time the president is told the truth… He is taking too much bullets for some of these ministers”. The General shook his head, not in approval or disapproval; he was just enjoying the chat.
He brought up a few issues and we all talked with surplus warmth. We hadn’t pressed him enough when the Navy helicopter appeared within sight in the sky.
He offered us the two spare seats in the helicopter, but we declined as our chopper was at that moment already landing. He pulled George Kerley aside for a two-aside.
They talked for about two minutes, and he joined Governor Yakowa again, as they strolled on the rigid pavement into the boisterous windy path of the chopper. The pilots dismounted the chopper to greet their VIP passengers; they looked smart in their military uniform. It was the governor’s and the general’s final handshake.
Seasonedpilot
Mr. Darego Williams, a seasoned pilot turned business man was joining our chopper back to Port Harcourt. He cringed at the manner the chopper had taken off and didn’t stop starring at the effects of the rotor blades.
I noticed he was a little uncomfortable, but then he had been off the cockpit for over two decades, so he contained thoughts.
Less than ten minutes later, we were ready to go. The captain welcomed us on board and soon after we were in the air. We had just done about 10 nautical miles when the pilot suddenly did a 180 degree turn.
Mr. Darego Williams was curious and called on the captain. The captain apologized to all on board and announced to us that a helicopter had just ‘gone down’. He actually meant ‘crashed’. We were the first search party.
Less than a minute ahead, smoke plumed from the thick swampy forest. It was a clear sign of danger.
We did about four low fly passes to capture the coordinates of incident site. Our helicopter had ingested the smoke and smell of burning metals, wires and flesh. We could see the helicopter and the appendage bearing the ‘NAVY’ inscription had severed from the main body.
The moment was intense, we doubted the very facts we knew. We all believed some miracle could have happened; the worst case was not an option. It just could not be true.
Posted by Unknown at 22:33