My ex abducted, raped me because I dumped him – Rescued victim

The hitherto quiet atmosphere witnessed in Ligali street, Ojo road in Ajegunle area of  Lagos was recently truncated, following the abduction of a 22-year-old lady identified as Bose Ashade, right in front of her compound. Noone could go for Bose’s rescue, as the thugs said to have been  heavily armed, threatened to kill anyone who dared to thwart their mission.  And before everyone, helpless Bose, was whisked away in the thugs operational motorcycles. Time was 6pm last Friday.
Her apprehensive grandmother could not be consoled as she wailed uncontrollably, wondering why any one  would choose to abduct her granddaughter who has been in her custody since the demise of  her parents.
However, about seven hours later, news filtered in that Bose had been rescued by policemen from Layeni division, somewhere around Arinu Ishola street, Alaba. Upon inquiry, it was discovered that her abduction was masterminded by no other than her former boyfriend, one Ibrahim Bolaji. 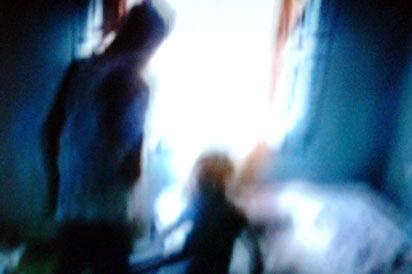 Bose as gathered , had been in a relationship with Ibrahim for two years before the relationship went sour, over an unknown reason.
Crime Alert gathered that Ibrahim had on several occasion attempted to win back his girlfriend, all to no avail.
But along the line, he reportedly learnt that one of his friends was going out with Bose, a major reason he told Policemen made him abduct her.
Hear him: “Even if she was leaving me, she should have at least, accorded me the respect by going for another person instead of my friend. It was like a slap on my face. I only sent some of my friends to abduct her so as to teach her a lesson. I never intended to collect any money as ransom”, he said.
But while in the hideout, Bose said she was raped by Ibrahim. At first, she said she thought the thugs were kidnappers. Sharing her terrible encounter with Crime Alert, she said: “From  the way they operated, I concluded they were kidnappers.
My grand mother sent me on an errand that fateful evening and immediately I stepped out o f the compound,   about nine men grabbed me and  started beating and dragging me at the same time on the ground. I begged them not to kill me , that I was not having any money with me. But they did not stop.
When  I got to their hideout around Alaba, my ex-boyfriend, Ibrahim, came in. I was shocked and asked why he would do this to me. Before I could finish the statement, one of them landed a slap across my face. And right there, Ibrahim raped me asking if that was not what I wanted.
My phone saved me
“When he finished with me, he left me in the room and directed his boys to keep an eye on me. But I had  my phone with me and quickly text the location I was to my new boyfriend who contacted policemen at Layeni. The policemen arrived at about 12.30am and rescued me. But for their swift arrival I do not know what would have happened to me”, she said, weeping.
Meanwhile, Crime Alert gathered that policemen at Layeni division were on the trail of the thugs who stormed Bose’s place that fateful day.
Posted by AB4CHRIST at 22:53