Nobel Laureate, Professor Wole Soyinka, Wednesday, emerged winner of the first Obafemi Awolowo Prize for Leadership.
Chairman of the selection committee, Chief Emeka Anyaoku, who unveiled the recipient of the maiden award, yesterday in Lagos, said: “Nominees for the prize are expected to have demonstrated, to a substantial degree, the attributes considered to have characterised Chief Awolowo’s leadership style.
“They include integrity, credibility, discipline, courage, selflessness, accountability, tenacity of purpose, visionary and people-centred leadership, as well as respect for the rule of law and press freedom.
“After very careful consideration, the selection committee came to the unanimous conclusion that of all the nominees presented before it, the individual adjudged to possess, to the highest degree, the attributes for the award and is, therefore, the first ever recipient of the Obafemi Awolowo Prize for Leadership, is Professor Wole Soyinka.
“An appropriate citation of Professor Soyinka will be given at the actual award ceremony which is scheduled to hold in March 2013, to coincide with Chief Awolowo’s birth anniversary.”
Meanwhile, Governor Rauf Aregbesola of Osun State has described Professor Soyinka’s award as a crowning glory. 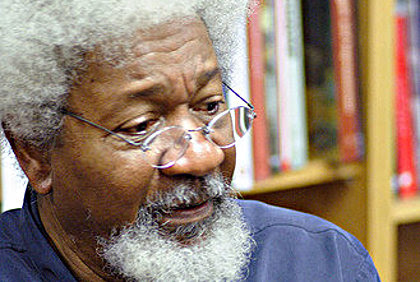 He noted that Soyinka had, in various ways, demonstrated many of the core values that have been associated with Chief Obafemi Awolowo, which the prize is meant to encourage and reward.
Aregbesola, in a statement by the Director, Bureau of Communications and Strategy, Mr. Semiu Okanlawon, said Soyinka exemplified the true leadership essence that the late Obafemi Awolowo stood for.
He said: “This prize to the Nobel Laureate is a homemade laurel bestowed on our own, who has traversed the globe, raking in honours for his academic excellence, scholarship, relentless promotion of the culture of the African people and his service to humanity.
“To be named the first winner of the Awolowo Prize for Leadership is a crowning glory. He had done the black race the honour of winning the Nobel prize.
“His life remains a source of inspiration to the younger generation. He exemplifies all that Awolowo preached and practiced in leadership.
“Nigerians in general and Yoruba in particular should continue to be proud of both Obafemi Awolowo and Wole Soyinka, while their qualities should energise the current crop of leaders in the country to dedicate themselves to the cause of humanity.
The prize consists of a medal, a certificate and a plaque. The emphasis is on the intrinsic value of the award, which, in itself, not only confers considerable honour and recognition on the recipient, but also serves as a strong incentive for the pursuit of excellence in leadership and good governance in Nigeria.”