Fireworks tragedy: Traders rush back from villages ….As death toll rises to four

LAGOS — Management of the General Hospital, Odan, Marina, Lagos State, Thursday, said that three unidentified persons were brought dead to the hospital from the site of the firecrackers explosion yesterday at Ojo-Giwa, Lagos Island Local Government.
One 15-year old was burnt beyond recognition when the fire started on Sunday
Meanwhile, some of the affected traders who travelled for the Christmas celebration have started returning  following the incident.
The traders, majority of whom were from the eastern part of the country, were sighted at the scene of the fire incident yesterday, lamenting their fate.
The latest casualty figure was disclosed by one of the senior officers who pleaded anonymity at the hospital, who said that the three persons were taken to the hospital on emergency
According to her, “28 injured persons were brought to this hospital, while three others apparently burnt to death were also brought later  wrapped in body bags that would aid movement of the corpses.” 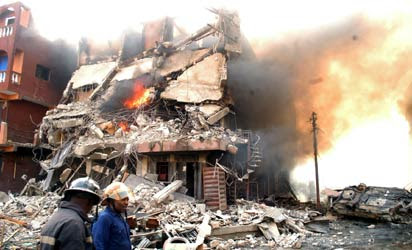 She added that the three persons brought in dead, were children.
“At present, we have four of the victims from the scene of the explosion on our admission list,” she noted.
Vanguard gathered that one of those on admission is one Murphy, who jumped from the three-storey building at No. 42 Ojo-Giwa Street, Lagos.
Vanguard investigation revealed that the victims were admitted at the Burns Unit of the hospital. (ward B3).And a few of those who were injured, that we couldn’t  manage were referred to LASUTH. because they were in critical situations.”
On what would be the fate of owners of the structures affected and those sited within the axis, Farinloye said that the agency has handed over the site to the LagosGovernment to comm- ence test on the structures sited close to the scene.
According to him, “the explosion has affected the foundation of the structures  closer to the scene. And we have marked 20 houses for the test.”
Posted by Unknown at 02:36