ABUJA — The Nigerian Navy disclosed, yesterday, that it had commenced investigation into the cause of the crash even as bodies of the victims have been deposited at the Federal Medical Centre, Yenagoa, Bayelsa State.
A statement signed by the Director of Naval Information, Commodore Kabiru Aliyu reads: “The Nigerian Navy wishes to confirm that search and rescue effort has led to the recovery of all the four passengers and the two pilots on board its helicopter, NN 07 which crashed on December 15, 2012.
“The bodies of the victims have been recovered from the scene of the incident and the crash site has been duly secured to allow for detailed investigation. It should be noted that the report of the investigation would be made available as soon as possible.”
The names of the victims, according to the statement are, Mr Patrick I. Yakowa, Governor of Kaduna State; General Andrew Owoye Azazi, former National Security Adviser; Mr Dauda Tsoho, aide to Governor Yakowa; Warrant Officer Mohammed Kamal, aide to General Azazi; Commander Murtala Muhammed Daba and Lieutenant Olukayode Sowola.
Gov declares 3-day mourning
Also yesterday, Governor Seriake Dickson of Beyelsa State declared a three-day mourning in the state and directed that flags should fly at half mast in honour of the crashed victims. He also cancelled all the state government engagements. 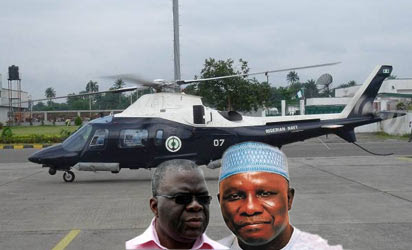 Dickson, yesterday, accompanied by former governor of Bayelsa State, Chief Diepreye Alamieyeseigha; Chief of Naval Staff, Dele Ozeoba; top military chiefs and senior Bayelsa government officials visited the morgue of the Federal Medical Centre, Yenagoa where the remains of the victims of the ill-fated helicopter were deposited.
Speaking with newsmen, the governor who struggled to control his emotion said: “This is a very sad day for our dear state and great country. This day we are reminded once again of our mortality. It is tragic and irreparable loss for this state, the government and the people of Kaduna State. Let me first of all express our condolences on behalf of the good people of Bayelsa State and express our condolences to the people of Kaduna State whose Governor came visiting to strengthen and deepen bonds of brotherhood.
“Let me also express our condolences to the President and Commander in Chief of the Armed Forces and Chief of Naval Staff for the loss of those gallant officers.
“The right steps and decisions will be taken. As a government, to underscore our profound strength of bereavement I hereby direct three days of mourning in memory and in honor of the contributions and services and sacrifices of our departed heroes. Within this period,  all flags in Bayelsa State shall fly at half mast.”

Bodies of victims moved to FMC Yenagoa
It was reliably gathered that the remains of the crashed victims were deposited at the morgue of the Federal Medical Centre, Yenagoa between 2.30 and 3am, yesterday, by military personnel deployed to the mangrove swamp, the scene of the tragic crash which threw the riverside settlement of Okoroba into mourning.
According to sources, the bodies were conveyed to the Ogbia waterfront in Ogbia Local Government Area in a convoy of boats accompanied by military gunboats where they were received by a waiting team of military personnel and top Bayelsa government officials before the remains were moved to the medical facility.
The Ogbia jetty was reportedly cordoned off by military operatives mourning the tragic incident.
We heard a phone ringing at crash site—Rescue operative
Some members of the rescue team involved in the emergency operations that located the crash site of the doomed helicopter alleged that the mobile phone of the late governor was rigging when his body was recovered from the wreckage at about midnight.
A joint search party of the Joint Task Force known as Operation Restore Hope, the youths of the Okoroba Community, members of the Civil Defence Corps and the National Emergency Management Authority (NEMA) recovered the remains of the crash victims.
A security operative, who pleaded anonymity, said with the assistance of the youths of the community, the crash site was discovered leading to the evacuation of the charred corpses.
The source who confirmed that the victims were burnt beyond recognition, however, said a corpse, which burnt from head to mid-section, with the lower parts covered with blue colour native attire, was identified as the Kaduna Governor.
According to him, “when we brought the body out, we started hearing sounds of phone ringing from the left side of the pocket. We later discovered that calls were coming to the phone and it could be from concerned persons but no one answered.”
Yero sworn in as new gov
Meanwhile, less than 24 hours after the death of Sir Ibrahim Patrick Yakowa, Governor of Kaduna State, his deputy, Alhaji Muktar Ramallan Yero was sworn in by Chief Judge of Kaduna State, Justice Rahila Cudjoe.
Yero was sworn in around 1:10pm at the Council Chambers  of Government House Kaduna, with his supporters in boisterous jubilation in the midst of the tragedy.
In his acceptance speech, Yero said: “It is with heavy heart that I make this speech having just fulfilled a constitutional requirement of the Federal Republic of Nigeria. The sad event that befell Kaduna State, yesterday (Saturday), is already public knowledge.
“Our amiable Govenor, Sir Ibrahim Yakowa has suddenly left us by answering the call of our creator. Indeed, from Him we all came and to Him we would all, one day, return.”
Indeed, between these periods is the previledge we have to serve humanity.
“We are living testimonies to the fact that our amiable Governor, Sir Patrick Ibrahim Yakowa , who came, did serve humanity in various and diverse capacities, well, and has suddenly, without notice, retuned to our Creator. His humility, dedication to duty, fairness to all and a high sense of humour, endeared him to many, near all and far, irrespective of religious, tribal or sectional inclinations. No wonder, he as given the pseudo name Nakowa (for everyone).
“This vision of Yakowa, Nakowa was to Secure, Unite and  Develop Kaduna State. He invested so much on this and started reaping the fruits of his labour. He wished to consolidate and advance on the achievements so far made and hence tagged Kaduna State’s 2013 Budget, which he presented to the Kaduna State House of Assembly on Thursday, 13th  December, 2012 as the “Budget of Consolidation and Advancement. I sincerely desire to build on the good foundation that my boss has laid. I therefore covet your prayers and for God’s wisdom,  guidance and direction.
“I take this opportunity to commiserate with the wife and immediate family of Sir Patrick Ibrahim Yakowa, in particular, members of the Government of Kaduna State and the entire citizens of the state over this sad moment we have found ourselves in.
May God in his infinite mercies comfort us all. I shall later in the day state wide broadcast to the citizens of Kaduna State when more details of the sad event are known.
Posted by AB4CHRIST at 22:30