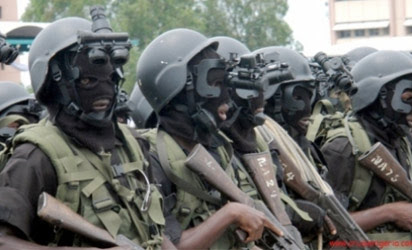 He said that the JTF arrested the illegal `bunkerers’ at Mesembe Avenue at Anatigha in Calabar South Local Government Area of Cross River through an intelligent report.
Joseph said that the oil thieves were arrested on Christmas eve at 7 p.m, noting that the area was one of the hideout in Calabar South.
“We got an intelligent reports about this hideout, you can see in their hideaway, there are over 10,000 drums of diesel products and when we came, we raided the place,’’ he said.
He said that Nigerian Army was determined to curb the activities of oil theft in Cross River in particular and Nigeria in general.
The oil thieves dredged carnal in Calabar South to enable their boats convey the illegal diesel through water channel.
“Our soldiers have been combing Calabar South to make sure that illegal bunkering does not make headway in Cross River,’’ Joseph said.
Joseph said that Nigerian Army was working in collaboration with the Nigeria Security and Civil Defence Corps (NSCDC), to check the activities of oil thieves in the state.
He advised the perpetrators of the act to desist from the illegal bunkering or the long arm of the law would catch up with them.
The Army spokesperson said that the six people arrested had been handed over to Civil Defence for further investigations. (NAN)