Ground survivors and families of ground victims of the Dana airplane that crashed on July 3rd this year said the airline’s insurers had refused to include them in claims settlement. The ground survivors alleged  that some families of the deceased members on board have benefited from the interim compensation of $30,000 per victim’s family, while none of the families of ground victims have received one cent.
Speaking through their legal adviser and Consultant, Mr. Gbenga Eguntola, the survivors said that some ground victim’s have lost their means of livelihood , while some have sent their wives and children back to their various towns and villages as their hope of quick settlement are waning by the day.
Eguntola said “The Mother of late Habibat Yusuf, Alhaja Modinat Sanni, who depended totally on her Daughter for her daily sustenance, is helpless, hunger, deprivation, and poverty has been her constant companions.
“Modinat is presently ill with no one to take care of her, and her only Daughter whom she depended on was one of the ground victims who died during the crash.”
Eguntola said, while the identities of late passengers and crews aboard the ill-fated air craft are already known, this is not so for ground victims. “How many people died on the ground? A clearer picture of ground casualties are just emerging after the accident, he said. 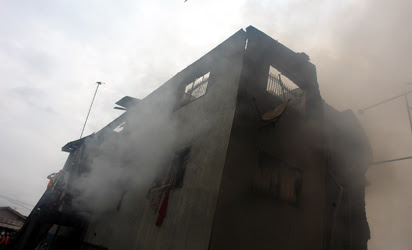 He stated that the firm had filed insurance claims for 18 ground survivors on June 20, this year, forwarding various copies to Yomi Oshikoya, the solicitor to the airline and its insurers. “The deliberate delay and reluctance of the aircraft insurers to settle the claims of the ground claimants are indeed worrisome” he stated.
According to him, some families of deceased members of the crew have benefited from the interim compensation of $30,000 per victim’s family, none of the families of the ground casualties have received one cent and those already traumatized by the incident have been exposed to so much pains, leaving some homeless by now.
Eguntola added that many residents of Olaniyi/Akande area, those living in houses atop which the aircraft crashed and in houses within the vicinity of the crash site, not only sustained injuries, physical and psychological but properties were also lost.
He said, “Investigations carried out by the firm revealed that offshore insurer, Lloyd Insurance is ready with its own 70 per cent share of the risk, and there are issues of readiness of the local insurers led by Prestige Assurance to honor their own 30 per cent commitment.
He urged the National Insurance Commission, NAICOM, to compel reluctant insurers to honor their 30 per cent share of the commitment under the third party liability claim. “Local insurers having pocketed huge premium from Dana Airlines, should not be allowed to escape third party liabilities, which in this case are unlimited” he said.
Posted by AB4CHRIST at 00:01