Swift and Slow, strong and Supple: Obasanjo and Jonathan

What had been whispered as a quarrel between President Olusegun Obasanjo and his one time protégée, President Goodluck Jonathan burst out yesterday after Obasanjo’s Man Friday, Femi Fani-Kayode took up Jonathan on issues pertaining to the invasion of Odi.
At issue is Obasanjo’s swift response to Boko Haram and his protégée’s alleged slowness to the Boko Haram insurgency.
It was a lecture to mark the 40th anniversary of the repentance of Pastor Ayo Oritsejafor from the life of crime. 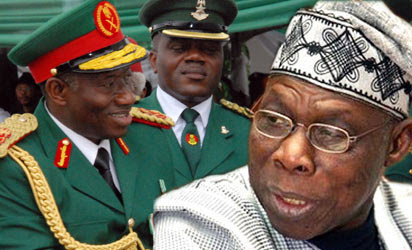 It was thus an irony that an occasion to celebrate the man of God would turn into a platform that would generate a quarrel between former President Olusegun Obasanjo and his one time protégée, President Goodluck Jonathan.
Speaking at the occasion in Warri last week President Obasanjo had expressed discomfort at what he described as President Jonathan’s slow response to the Boko Haram insurgency.
“My fear is that when you have a sore and you don’t attend to it early enough, it festers and becomes very bad. Don’t leave a problem that can be bad unattended,” President Obasanjo had said.
Noting how he responded to near similar situations during his civilian regime when militants in Odi, Bayelsa State killed some soldiers and then in Zaki Biam, Benue State, Obasanjo continued: