Eko 2012 : A celebration of Nigerian music

The closing ceremony of the 18th National Sports Festival, Eko 2012 was momentous. The ceremony was an occasion that bridged the generational gap among the hordes of spectators on the stands and TV audiences across the country.
It was a party, a jamboree of class and panache. The organisers put up a near perfect show that reaffirmed the belief that with unity of purpose, Nigerians can achieve whatever they set out to achieve. 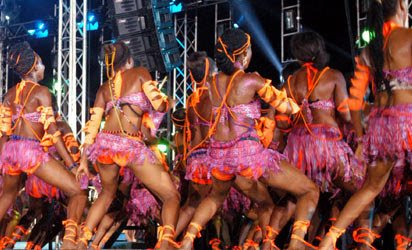 When the party started after the numerous speeches, no one could hold back. Both the youth and grand Pas were on their feet releasing the tension of days of competition and hardwork. It was party time indeed.
When TY Savage took to the stage, her renditions were electrifying. The dexterity of the over a hundred dancers on the stage with her added colour to the engaging atmosphere.
“What a way to end it all,” a fellow journalist told this reporter, as the artiste reeled out one performance after another. She left the stage when spectators were yearning for more.
And more was still on offer. The emergence of the mercurial Wande Cole, the famous Mushinboy whose exploits are known internationally was welcomed with a wild roar.
The roar was even louder when he began to sing his monster tune, Bumper to Bumper. Here, the youth on the stands were in command. Most of the boys ripped open their tops leaving their chests bare.
The girls responded with fine footwork and, at times, very suggestive gestures that translated the lyrics of the song. There was chemistry as the men moved swiftly not to be outdone by their women.
If Wande Cole was a joy to watch, Nigerian kid-star, rightly named Whizzkid was something else. He did justice to his popularity after holding the audience spell-bound for close to one hour. His renditions were captivating and his stage craft was second to none.
Then entered Seun Kuti, son of the Legend of our time, Fela Anikulapo Kuti who was a near-perfect imitation of his iconic father. Seun’s delivery was awesome. His stage craft, his Fela-like look and gestures brought back the memories of his late dad. The power behind the voice was, no doubt Fela’s and the stands erupted.
My boss, Onochie Anibeze and other senior colleagues like Gbenga Okegbenro, Yomi Okpakunle, Andrew Ekejuba, among many others could not hold back as they danced from Teacher don’t teach me nonesense to Dem all crazy.

However, it must be noted that Seun’s hardwork was almost marred by the poor sound engineering work.
2Face Idibia was the last act and it would only have been better to be there to witness the performance of this Nigerian music ambassador. He brought back life into the show and deservedly closed the night on a high.
It was a night to remember, a closing ceremony that will linger in the memories of many for a very long time to come..
The event was a huge vote for Nigerian music and hope for the future of the Nigerian youth. Some years back, millions of Naira would have been spent to ship in international artistes fromAmericaorEuropeto perform. The show was another big plus for Eko 2012.
Posted by Unknown at 22:57