Two suspects identified as Kayode Ogunwa and Oluwa Femi, are currently cooling their heels at the State Criminal Investigation Department, SCID, Panti, Yaba, Lagos, following the stabbing to death of a hotel attendant, identified as Mr. Otumala Ukama Benson, a 32-year-old, a native of Benue State, over a misunderstanding during penultimate Sunday English Premiership League, EPL, clash between Chelsea and Manchester City football clubs.
The incident happened at one of the popular hotels (name withheld), along Isheri- LASU- Igando Road, near Diamond Estate. The two suspects were promptly arrested and detained in a cell at the Area ‘M’ Police Command, Idimu, and are now facing murder charge in connection with the incident.
According to a police source, the suspects reside at Diamond Estate, opposite the hotel and drove there to watch the match. 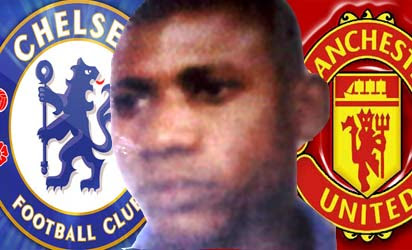 On the fateful day, the hotel, it was gathered, was filled to capacity and some customers who wanted to buy drinks could not get chairs to sit.
Customers seeking to buy drinks
This prompted the late Ben to ask those watching the match without buying drinks to get up and allow those willing to buy drinks to be  seated. The suspects who did not buy drinks refused to vacate their chairs and this resulted in an argument between them and the late Ben. The argument later degenerated into a brawl during which one of the suspects ran to the car and brought a knife with which he stabbed Ben in the neck.
The hotel attendant, investigations revealed, bled to death from his wound before he could be rushed to the Igando General Hospital. His body was later deposited at the Ikeja General Hospital mortuary for autopsy. The “Area M” Command, later transferred the case to SCID, Panti, Yaba, for further investigation.

An eyewitness, who is also one of the managers in the hotel, narrated the ugly incident to Vanguard Metro thus: “Ben was carrying out the instruction of the management that anyone who was not buying drinks should not use the Executive bar but could make use of the general bar. So Ben approached a group of guys, who were just occupying the sofa, and asked them to kindly vacate the place as there were many stranded guests outside who were ready to buy drinks.
“I learnt that this infuriated one of the guys who went after Ben for daring to ask him get up from his seat. He dealt some blows on Ben and in defense Ben pushed him away and took to his heels sensing that the clash might degenerate into a serious fight. But the guy in anger smashed a glass door with his foot and in the process sustained injury on the leg with blood dripping from the cut.
Blood drips from injury
“A guy from the group seeing blood dripping from his friend’s leg went straight to his Honda car with number plate FKJ 436 AH, and emerged with a sharp knife. I tried to stop him but he threatened to stab me if I did not move away. I could see the determination to kill in his eyes, so I quickly stepped aside thinking Ben was still in hiding but not knowing that he had reappeared.
“Ben was being held by the other members of the group who were asking him how their friend got his leg wound. At that point Ben was backing the guy with the knife and the guy went straight for Ben’s neck, stabbing him so deep that blood started gushing out like tap water.
Ben screamed immediately, holding his neck and trying vainly to staunch the flow of blood. Failing to stop the bleeding, he ran outside the gate seeking for help. At this stage, the guy who stabbed him, realising the gravity of his crime, started saying he didn’t mean to stab Ben so deep.
“I ran after Ben and soon caught up with him; but he slumped into my hands, saying, ‘I am going to die’. I assured him that he would not die as I was taking him to the hospital. We rushed him to Igando General Hospital where he was pronounced Brought In Dead, BID, that is dead on arrival. The Police were later contacted and the suspects were arrested and detained.
“We have contacted the families of Ben, they are on their way to Lagos to pick the corpse for burial in his home town.”
Posted by Unknown at 22:42