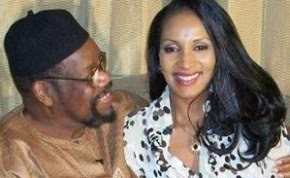 The secret daughter ex-Biafran leader left behind was brought up by a prominent Muslim family in Kaduna. She lives among the Northern elite and detests any suggestion that links her with the former warlord. This is the extraordinary story of Ojukwu's mystery daughter.
Even in death Dim Chukwuemeka Odumegwu-Ojukwu, Nigeria's best known rebel leader, seems to have retained his ability to shock. The revelation that he had a secret daughter -- to whom he allocated, in his will, one of his landed properties -- shocked even the other members of his family. But perhaps more shocking is the discovery -- through Sunday Trust investigation -- that the daughter was actually brought up by a prominent Northern Muslim as his own "child".
Tenny Hamman, as Ojukwu called her, was raised in Kaduna by former Deputy Inspector General of Police Hamman Maiduguri as his own "daughter". Although she was formally named Aisha (the name she used in school), she is also called Tani (or Aunty Tani by younger relatives). Tani is a traditional Hausa name given to a female born on Monday. Apparently the name Tenny (or Tenni) that Ojukwu called her is the corrupted version of Tani.
Late Hamman Maiduguri was a top police officer who spent a significant part of his life in Kaduna. He hailed from the north-eastern city of Maiduguri, Borno State capital. He was appointed Northern Region's commissioner of police after the death of the region's Premier Sir Ahmadu Bello, the Sardauna of Sokoto. He later became the Deputy Inspector General of Police (DIG) during the regime of General Yakubu Gowon, the man who led the crushing of Ojukwu's Republic of Biafra.
mystery child
The story of how Hamman Maiduguri became "the father" of Ojukwu's daughter appears to be as mysterious to even a section of his own family as it is to the other members of Ojukwu's family.
Much of it is still shrouded in deep secrecy but Sunday Trust investigation reveals that the late police officer did raise Tenny as his own daughter.
There are conflicting versions of how she came to be late Hamman's daughter. Some sources told Sunday Trust that she was the daughter of his wife, Mary Theresa (a Christian who later converted to Islam and is now called Inna or simply Hajia); others said Tenny was a daughter of Mary Theresa's sister and that the family adopted her as their own.
Posted by Unknown at 23:07