ALL workers of the Power Holding Company of Nigeria, PHCN, totalling about 50,000 and 4000 unregularised staff will be paid off as part of the full privatisation of PHCN’s assets, the Federal Government and organised labour have agreed.
The implication of this is that PHCN workers that will be absorbed by new owners will have a new condition of service in line with agreement with Labour.
Vanguard gathered that government needs over N400 billion as against less  than N200 billion earlier earmarked by it to settle the workers severance pay which terminated on June 1, 2012. 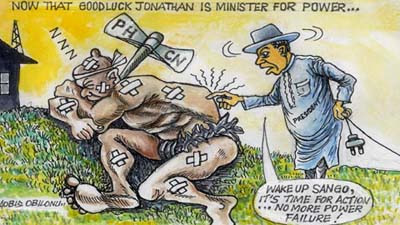 Similarly, the government has agreed that the total accrued gratuity as at June 30, 2012 shall be paid to active PHCN workers in accordance with the defined benefit scheme stipulated in PHCN 2010 conditions of service. This is a major u-turn on the part of government which had agreed that the Pension Reform Act, PRA, 2004, had abolished gratuity.
These were parts of the agreement reached, Tuesday night, after over eight months of protracted negotiations.
Payment of gratuity had been the crux of the unresolved labour issues that had pitched organised labour against government, stalling the privatisation of PHCN assets and government reform agenda in the power sector.
Roll call at the meeting
The meeting held at the Secretary to the Government of the Federation, SGF, office was attended by the SGF, Senator Anyim Pius Anyim; Minister of Labour and Productivity, Chief Emeka Wogu; Minister of State for Power, Hajiya Zanab Ibrahim Kuchi;and Acting Director-General, Bureau of Public Enterprises, BPE, Mr. Benjamin Dikki (on the government side); President-General of the Trade Union Congress of Nigeria, TUC, Comrade Peter Esele; Deputy President of Nigeria Labour Congress, NLC, Comrade Joe Ajaero, representing Comrade Abdulwaheed Omar, President of NLC; President-General of Senior Staff Association of Electricity and Allied Companies, SSAEAC, Comrade Bede Opara and Deputy President of the National Union of Electricity Employees, NUEE, Comrade Isaac Abegye, representing Mansur Musa, President of NUEE (on Labour side).
The agreement
The agreement released at the end of the meeting read: “This agreement is made this 11th day of December 2012 between the Federal Government of Nigeria, FGN, represented by the Secretary to the Government of the Federation on the first part and the Nigeria Union of Electricity and Allied Companies SSAEAC both herein referred to as labour unions within the Power Holding Company of Nigeria, PHCN; the Nigeria Labour Congress, NLC, and the Trade Union Congress, TUC, all of the other part and represented here in by their responsible officers hereinafter indicated.