…Says suspects were to bomb VP, others at event in Kaduna
ABUJA — A senior Army officer whose team apprehended some of the alleged masterminds of the explosion that rocked office of the Independent National Electoral Commission, INEC, in Suleja, Niger State, prior to the April 16, 2011 presidential election, Wednesday, narrated before a Federal High Court in Abuja, how the suspects were nabbed while en-route Kaduna to bomb an event he said was attended by the Vice President Namadi Sambo.
The witness whose identity was masked by the Federal Government which is prosecuting six of the alleged members of the dreaded Boko Haram sect, told the court that after some of the suspects, who he said hid inside a trailer covered with tarpaulin, were caught, it was discovered that their sponsor had promised each of them an inheritance of 72 virgins in paradise.
The army officer, who mounted the witness box, said two months after the Suleja bomb blast, his team, on July 27, 2011, mounted a road block at Gummel Junction at Kachia, Kaduna, “when we saw a big trailer coming and we saw another car behind the trailer. Surprisingly, immediately we asked the trailer driver to remove his tarpaulin, two of the suspects jumped out.
“The second car also had another suspect who was carrying explosives which we immediately impounded. We also seized four handsets and N26,000 from him. While interrogating them, they said they were coming from Suleja.”
The witness told the court that upon close scrutiny of the seized phones, the team discovered two striking text messages, he said, indicted the accused persons to acts of terrorism.
He said the third suspect was holding a very long brown envelope containing Cortex wires, industrial powder and other ingredients for the manufacturing of Improvised Explosive Devices, IEDs, adding that all the materials were handed over to the State Security Service, SSS, in Kaduna.
The text messages
“Before I handed over the phones to the SSS, I got out two text messages which I will like to read to the court,” the witness added.
Sequel to approval by presiding Justice Bilkisu Aliyu, the said text messages were read in the open court, yesterday.
One of the said messages read: “Do a deed which Allah by his grace and mercy save you from the punishment of the grave and a dangerous bridge with the speed of light and make you pass Serud (sic). Save you from the greatest fear and hell fire. 70 members of your family will marry you 72 virgins in paradise; give you a crown of respect which even the prophet will be impressed with; I say by the Rasud, ‘keep your soul in the green birds of paradise and you wish to return to the world and die as he died because of the good blessings and reward you encounter after such a noble last deed. I pray for such a noble deed.”
Meantime, the second text message read: “Breast swelling, cap Clous 500 QDS, Tap flag,” which the witness said could be a code for arrangement and detonation of explosives.
He told the court that in the other phones, he saw pictures of the late leader of the Boko Haram sect, Yusuf Mohammed, and another picture of three blind-folded men carrying AK-47 riffles. 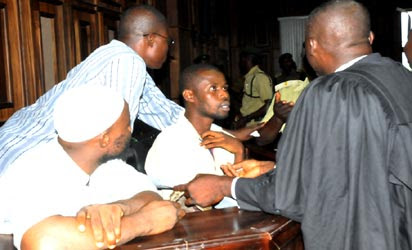 Suspects were to bomb VP, others at event in Kaduna
The witness further maintained that investigations revealed that the suspects were headed for Kaduna where he said the Vice President, some Northern governors  and top government functionaries, attended a game he said held on July 28, 2011, saying: “We suspect they were going there to cause mayhem.”
Nevertheless, counsel to the suspects, Mr Emeka Okoro, said he could not cross examine the witness since the statement containing most of the allegations he made against the accused persons, was not before the trial court, but with the SSS.

He maintained that he would need it due to the sensitive nature of the case, a request that was granted by Justice Aliyu who adjourned the case till today.
It would be recalled that six suspects, Shuaibu Abubakar, Salisu Ahmed, Umar Babagana-Umar, Mohammed Ali, Musa Adam and Umar Ibrahim, are standing trial over alleged multiple bombings and killings in Suleja, Madalla and its environs.
Acused participated in various terror attacks
Specifically, the security agency in a five-count criminal charge it recommended against them, maintained that its undercover investigations revealed that the accused persons participated in various terror attacks that killed 28 persons between March and July.
However, since September 30, 2011, when the accused persons were docked before the high court, they have been attending trial from the Kuje prisons.
The prosecution had alleged that the six accused persons, “between June 4 and July 12 (both dates inclusive) at various locations in Suleja, Niger State; Azare, Nasarawa State and the FCT, did engage in an act of terrorism by encouraging through training of persons now at large, the use of arms and ammunition, and the preparation, planting and detonation of improvised explosive devices for the purpose of terrorism and thereby committed an offence contrary to section 15 (2) of EFCC Act 2004 and punishable under the same section of the Act.”
It maintained that they were the persons that bombed a village, Dakna, in Bwari, Abuja, on May 23, an incident it said resulted in the death of three Peace Officers as well as detonated an improvised explosive device at a political rally in Suleja which resulted in the death of three persons too.
If convicted, the offence for which the accused persons are answering to attracts a punishment of life imprisonment.
Posted by Unknown at 23:00