Three time Nigeria leader, General Olusegun Obasanjo was at the head of an African Union, ECOWAS observation team to last weekend’s presidential and parliamentary elections in Ghana. At the end of the polls he gave his assessment of the election and other issues pertaining to the continent.
BY CLIFFORD NDUJIHE, ACCRA
FORMER Nigerian military and civilian Head of State, General Olusegun Obasanjo has hash words for African dictators and sit-tight leaders:  “You are now endangered species.“We don’t have to worry ourselves over sit-tight rulers. How many of them are left now? They are becoming endangered species,” Chief Obasanjo said in an answer to a question on why Africa is menaced by a host of power-thirsty rulers who do not want to leave office and often manipulate elections to remain in power.
The question came after Obasanjo, who is the joint head of the Economic Community of West African States (ECOWAS) and African Union (AU) observer missions to Ghana 2012 presidential and parliamentary elections, presented the preliminary observations of the two bodies on Saturday night.
Africa still habours a handful of sit-tight leaders, who are not entertaining any plans of quitting or retiring from the Presidential villas unless death forces them to do so.
They include President Robert Mugabe of Zimbabwe, who has been in power since 1980; Paul Biya of Cameroon (since 1982); Dennis Sassou Nguesso of Congo Republic (1979 to 1992 and 1997 till date); Jose Euardo Dos Santos of Angola (1979); Teodoro Obiang Nguema Mbasogo  of Equatorial Guinea (1979); Yoweri Museveni of Uganda (1986); Blaise Compaore of Burkina Faso (1987) and Omar Hassan Al-Bashir of Sudan (1989).
A vintage Obasanjo, who easily switched from seriousness to sarcasm and jocular mode, in a reply to another question said Nigeria did not need to copy Ghana’s cheaper parliamentary system of government and drop her expensive presidential system. Reason: “It is not the system that is expensive, it is the people. For Nigerians, whatever system we adopt they will make it expensive.”
Given that the Biometric verification machines (BVM) used in Ghana last weekend contributed hugely to the hitches which made the exercise to be extended in over 400 polling stations to the following day, a suggestion was made that Africa should side-step the machine-based electoral process and adopt an indigenous fool-proof traditional African method like Option A4, which Nigeria used in the early 1990s. Obasanjo disagreed with the suggestion. He said: “We in Nigeria are funny people at times. One of my colleagues (head of state) came up with it and we called it Option A4. In the election, you have to queue up behind your leader. Some people have suggested we return to the old Greek City State of gathering at the City square. We cannot return to all these because the modern state has gone beyond the Greek City State of gathering at the City square. The fact that Nigeria is not practicing the Option A4 means that your so called African native way of voting is not appropriate in the modern era. 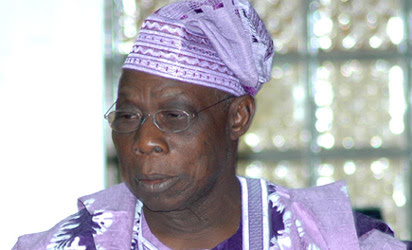 ”On the declining rate of women participation in politics, Obasanjo, who ruled Nigeria for 11 years, first as military ruler for three years and later as a civilian, during which he was alleged to have attempted a tenure extension dubbed ‘third term agenda’, tasked African leaders to take decisive action on women empowerment.

Noting that there is nothing in the constitutions of the various countries that directly prevents women from participating in politics, the former Nigeria ruler lamented that most African states are male chauvinistic . “The belief is that only women who are prostitutes go into politics. But we need to change this. If Rwanda can achieve 50 per cent affirmative action, others can do it. We (ECOWAS, AU) have all recommended that there should be affirmative action,” he stated.
When the master of ceremony kept referring to him as “General,” a vintage Obasanjo joked: “My political opponents in Nigeria call me ‘General’ when they want to paint me as a dictator. But in my party (Peoples Democratic Party, PDP) they call me a chief. So, it depends on where you belong.”
Ghana polls were ‘fairly fair’.
Earlier, in his review of the polls, Obasanjo said the 250-man ECOWAS and AU’s 40man teams arrived on December 3 ahead of the December 7 elections and were deployed to all parts of the country.“We watched the concluding part of the campaigns. As expected, the campaign was feverish.
It was laced with some words that are emotive and some words that were encouraging. But all in all, it ended peacefully. On the first day of the election, we went out; we saw the coming in of materials, in some cases late. The election was generally peaceful, orderly and smooth. There were hiccups but the hiccups were not such that would grossly undermine the result of the election.“
“So far, we have looked at the election objectively for a week now. We have cross-checked all we need to cross check. What we have issued is a provisional statement that the election has been fairly peaceful, fairly smooth, fairly transparent, fairly credible and fairly fair.“Elections are human operations.
No matter how hard you try, there may be areas where things will not go according to plans. This election is no exception. Late arrival of materials was observed. In one area, materials did not arrive until 12 noon. There was also breakdown of the biometric verification machine in many locations. When we saw the Electoral Commission, EC Chairman, he said many people in the field did not know and if they knew did not implement it. The batteries for the machines were to be recharged every five hours. If you allow the battery to go down to zero, even if you change it the battery will require two hours to pick up. This caused delay and the election was extended to the following day so that those who were on queue and could not vote on Friday would do so on Saturday.”
Thus, the ECOWAS team among other recommendations advised that there should be a back-up verification method like voters’ card and voters’ register instead of relying solely on the BVM for verification of voters before they could vote.
Said Obasanjo: “We are saying that there should be a fall back position. Machine is a machine and can fail. The EC should come up with a fall back position so that no eligible voter will be disenfranchised because a stupid machine has failed.”Tackled on ECOWAS team’s recommendation that the Parliament should come up with a law to regulate the media, which critics argued would hurt media freedom given that Ghana does not have the Freedom of Information of law yet, Obasanjo responded: “Now, right to libel has been removed from the statute book, and this allows a little bit of recklessness on the part of the media, which must be checked. Some say freedom of information, which I call right to information, must be taken along with certain bit of responsibility and respect.”
Posted by Unknown at 22:37