What is wrong with pastors owing private jets?

RECENT criticisms in the polity, generated by the increasing number of our religious leaders acquiring aircraft, should be expected.
This is so because such men of God are seen as being above the board and should not be cut out for worldly things, as they are supposed to be men who would deny themselves the vanities of this world and rather prefer to win souls for Christ.
They are expected, against all odds, to stand firm in faith even in the face of daunting earthly trials, persecutions and tribulations.
But the recurring decimal of failure to live this disciplined  life is fast growing by the day as a reasonable number of such high-flying Nigerian pastors now go the way of the world.
Basically, the church is founded on the principles of virtue and sacrifice for the sake of Christ – a foundation laid on the threshold of propagating Christ’s teachings – to win souls by helping to bring those who have gone astray into the fold and to lead the faithful to salvation, being the ultimate desire of every devout Christian.
It is regrettable that many of our pastors and churches today have strayed away from this original obligation and purpose of pursuing righteousness, at the altar of chasing earthly material things as they never practiced what they preached.
Trending now is the argument by the pastors that ownership of private jets is not a luxury as some claimed, but a necessity and an essential tool for their pastoral and public duties because evangelism, according to them, will be made easier and more efficient.
Recently, the American-based Warren Buffet and one of the world’s largest private jet manufacturers had punctured this line of argument when he said: “Everyone who says he needs a private jet to make important appointments is a liar. They need it for their ego. Name me one of them busier than I am who owns more US corporations than I do”.
Buffet, who was once the richest man in the world, does not even own a jet as he often flies in commercial aircraft!
Forbes magazine claimed that the nation may have spent about $6.5 billion in the purchase of private jets by government officials and pastors, a trend that had grown exponentially from about 20 jets in year 2000 to the current level of more than 160.
Top on Forbes’ list are pastors, especially, those of the Pentecostal churches, which have allegedly spent over $250 million on their new found hobby. 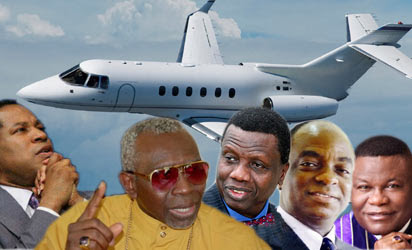 Pastor Ayo Oritsejafor, President of the Christian Association of Nigerian is, perhaps, the latest but he’s really not the only one who now flies around the world in the comfort of his luxurious aircraft.
Pastors David Oyedepo of the Living Faith Church (Winners’ Chapel) is also said to own three private aircraft, namely the Gulfstream G550 said to cost over $40 million, Gulfstream V Gulfstream G450 and a Lear Jet, which cost about $15 million and $14 million, respectively.
Pastor Enoch Adeboye, General Overseer of the Redeemed Christian Church of God, RCCG is said to own a Gulfstream Jet 5 brand worth $30 million. Pastors Joseph Agbodi of the Victorious Army Ministries, Sam Adeyemi of the Daystar Ministries and Temitope Joshua are said to own private jets, among others.
With the array of jet-owning pastors, the general feeling among the people is that the expensive lifestyles of these pastors are in contrast with the teachings of Christianity, especially, amid the glaring poverty and hardship in the land.

SUCH resources committed to flamboyance and misplaced priorities like the purchase of jets as well as the cost of maintenance could have been deployed into more useful activities that will have direct impact on the lives of the pastors themselves and the people, in terms of the provision of employment, social services and municipal facilities that will, in turn, generate income for the churches and invariably reduce the burden of imposing frequent levies on the already drained members.
Apart from the controversial private jets, churches are now seen as places where religious leaders own choice properties, fortunes and to an extent, join the political train, to acquire power to become relevant in the society.
This is made worse when religious leaders compete among themselves to own fleet of aircraft, travel in expensive SUVs in convoys of siren-blaring vehicles or have chains of businesses – these acts call to question the sincerity of those who claim to have such divine calling.
Apart from some missionaries, such as the orthodox and the Catholic Church that have established schools, hospitals and other social services for both the rich and the poor, most of the churches now have and run such ventures to secure their investments, not with the intention of offering any welfarism or to provide employment opportunities for the people.
In a desperate bid to get money, some religious leaders go extra miles to make clearly unsubstantiated, cynical and spurious claims from their followers who attend these churches to get miracles which, in most cases, are non-existent.
From time to time, they organise vigils, crusades, deliverance services and other crowd-pulling revivals, to bring together  multitudes of worshippers to contribute to a pool of offerings that are managed absolutely with low level transparency and devoid of any accountability.
Many of the so-called men of God are highly dictatorial as they engage in various antics such as divide and rule that tend to tighten their grip on the financial fortunes of their churches and weaken the collective will of their congregations in presenting any form of lawful challenge.
Proliferation of churches is, no doubt, a recent phenomenon in Nigeria as most of the existing ones were born in the late 1980s, after the economic depression occasioned by the Structural Adjustment Programme and the painful Bretton Wood institutions-induced public policies.
This is coupled with the prolonged military rule that had induced some negative socio-political consequences for the nation – endemic corruption, unemployment, sectarian crises and increased poverty.
These societal problems, fostered by bad governance over the years had led not a few adherents to quickly wish for a way out of such problems that governments, as a constitutional duty, had failed to offer any succour – so the fastest and easy way out:  visit mushroom churches, dance and smile away sorrow and listen to soul-rending but empty salvation tirades. No wonder, churches dot every nook and cranny of Nigeria without anything to show for our religiosity. Nothing.
And at the end, their pitiable conditions remain same or even become more critical as the religious leaders smile home with financial resources at the detriment of these hapless people.
It is instructive to note that recently, the Catholic Bishop of Sokoto Diocese, Most Rev Matthew Hassan Kukah, had observed that “the acquisition of private jets by Christian leaders diminishes the moral voice of the church in the fight against corruption”.
Kukah spoke against the backdrop of the presentation of a private jet to Pastor Ayo Oritsejafor by members of his church, at the 40th anniversary of Oritsejafor’s ministry.
The Prelate, who was guest speaker at the annual Founder’s Day Anniversary lecture of Providence Baptist Church in Lagos, described the exhibition of such opulence by church leaders as “embarrassing’.
“The stories of corrupt men and women being given recognition by their churches or mosques as gallant sons and daughters and the embarrassing stories of pastors displaying conspicuous wealth as we hear from the purchases of private jets and so on clearly diminish our moral voice,” he had stated.
He said such alliance will weaken the ability of the church to speak the truth to elected public office holders, adding that: “CAN has become more visible in relation to national prayer sessions, pilgrimages, alliances with state power and so on and unless we distance ourselves, we cannot speak the truth to power. We cannot hear the wails of the poor and the weak. We should not be seen as playing the praying wing of the party in power”.
Inasmuch as I tried to avoid making this piece look like a sermon, the church should be made to play its important role by exposing the ills of the society and be at the forefront of championing the dogma that de-emphasizes worldly desires, profess the ethos of “practice what you preach”, further the message of love and compassion for the poor, stop placing materialism above Christ’s teachings and put a stop to the undue emphasis on prosperity preaching.
The nation is in dire need of change, due to the near collapse of all known social institutions. Other pastors  contemplating such purchase- which is nothing but a status symbol should shelve it.
*Mr. ADEWALE KUPOLUYI, wrote from Federal Varsity of Agric., Abeokuta, Ogun State.
Posted by Unknown at 03:48