Woman implants cocaine in her breasts

MADRID (AFP) – Spanish police caught a woman smuggling more than a kilogram of cocaine hidden inside implants in her breasts, officials said Wednesday.
The Panamanian woman was caught at Barcelona airport after getting off a flight from Colombia, the national police said in a statement. 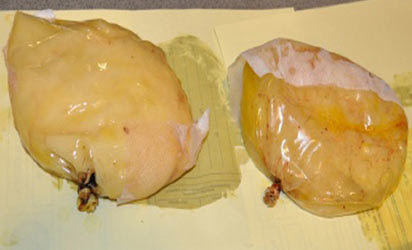 The woman “had two breast implants containing cocaine implanted in her. She had two open cuts under each of her breasts,” the police said, releasing a photograph of one of the loosely stitched wounds.
“She intended in that way to bring more than a kilogram of the drug into Spain,” the statement added.
Officials questioned the woman as part of standard checks carried out on passengers from Colombia — a major source of cocaine. When they searched her, they found bloody dressings on the wounds.
They took her to hospital where doctors removed the implants and tests showed that they contained 1.3 kilograms (three pounds) of cocaine, the police said.
Posted by Unknown at 22:47