ABUJA—DIRECTOR General of the Department of State Security, Ekpenyong Ita, yesterday, assured that the service and other security agencies are working with other stakeholders including the media towards ensuring that the activities of the Boko Haram sect are brought under total control for peace to  reign in the country.
Ita who gave the assurance at the opening of a one week training programe for media practitioners in Abuja, disclosed that activities of the sect have turned to a full scale business venture for its leaders. According to him, recent discovery of the main objective of the terrorist group runs contrary to the earlier claims by the group that they are actually fighting a religious war.
Criminal activities
The group he said actually started as an extremist religious group under the late Mohammed Yusuf, but later transformed into a business venture, as the sect members are now make good living out of their criminal activities.
Assuring Nigerian public of the capability and readiness of the security agencies in the country to restore peace, Mr. Ita noted that activities of the group have not in anyway overwhelmed them. He declared: “we are not overwhelmed, we can never be overwhelmed and we will never be overwhelmed. We are up to the task”. 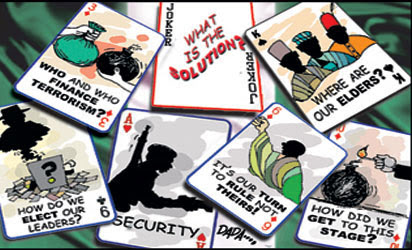 He said that despite continued bombing of innocent persons across the northern region of the country he assured that the group will soon be put out of business, describing the group as enemies of the common man which should be jointly fought by all and sundry.
Armed robbery
Giving an insight into activities of the group, he disclosed that the service has confirmed from some high ranking members of the group that they mainly engage in armed robbery and share the loot with the leaders taking the lion share. Explaining how the loot are shared, he said that “what is brought in is divided into five portions with the leader given a portion and the rest four divided among those who took part in the robbery, while a portion will be given to alleged widows, the less privileged and as well, the elderly.
“However, the four groups aside the leaders are forced to pay “zakat” which in turn are remitted into the account of the leaders who use such proceeds to purchase exotic cars and flaunt their wealth which run contrary to the tenet of Islam which they allegedly profess.”

He appealed to the media to contribute to the fight against the group by stifling the terrorist group of publicity which he noted, they crave to instil fear into the minds of the citizens.
According to him, terrorists across the world take delight and grow when they are given publicity as he urged media house owners and practitioners to stop giving “oxygen” to the terrorists, who will die with force mounted on them by the security operatives and as well, ably supported by media blank out.
He noted that national security should be paramount in the minds of practitioners as media owners can only flourish and enjoy the fruits of their labour in a society devoid of crisis and insecurity.
In his presentation, the guest speaker, Alhaji Musa Maiyaki, Acting Director General of Nigeria Television Authority said that there is the need for cooperation among stakeholders especially the media and security agencies to an end the activities of the evil group to restore peace and stability to the nation.
Posted by Unknown at 23:04