The atmosphere was similar to what fans experience at  international champion-ships.
Ambiance was superb and the crowd enjoyed it and showed this with ceaseless cheering the moment the swimmers took the plunge. 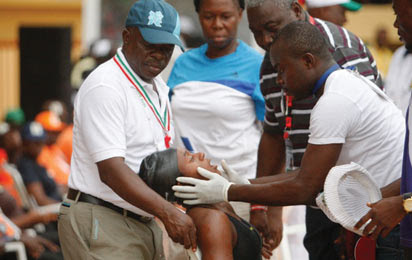 The swimming poolarena was full last night at the ongoing Sports Festival in Lagos. Fans even gate-crashed  for seats.
Lagos had a fan club that produced soothing music for their swimmigers and Ondo’s Ibukun Adamolekun benefited from it and thesupport of fans whose cheers appeared to be inspiring all in the pool.
In the beginning of the final of 200 m Butterfly for women, Ibukun took a comfortable lead at the first and second laps.
She appeared to be coasting to the gold even on the third lap. But Emutimu Duke of Delta gave her the chase of her life and alsmost caught up with her in the final lap.  Emutimu surprised all and she was cheered on.
But Ibukun would rather die than lose the gold that once appeared an easy one before the hot chase. She gave her all and still won it but it was not as easy as she impressed in the beginning.
She was exhaused and while celebrating her hard earned gold she saw herself gasping for breath and was falling back into the pool before she was quickly rescued. She signaled danger and called for help.
She collapsed and the medical team battled to revive the fanited swimmer. The arena turned quiet and people prayed that tragedy be averted. After about five minutes, Ibukun was revived and the fans cheered the gold winner as she was taken to the medical room for further attention.
“It was an interesting event’’, veteran swimming coach Steve Onyeacholam said. ‘’If I went fast early I would have probably beaten her but I was cautious not to brun out early but by the time I realised the gap was wide.
It was late for me to catch up’’, regretted Delta’s Emutimi. More than one hour after the event, officials were yet to release times of the swimmers, a low point for them.
‘’You are causing me tension’’,  replied an official in charge of recording  the times when asked to supply times recorded  by swimmers in the events.
Posted by Unknown at 22:54