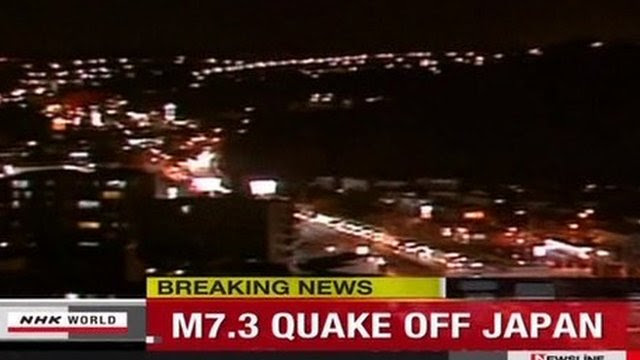 A 7.3 magnitude quake has struck off Japan's eastern coast, triggering a tsunami warning and a one-metre wave that has hit Miyagi Prefecture.

The wave hit the city of Ishinomaki, while the quake was also felt strongly in the capital, Tokyo.

The epicentre of the quake was about 245km (150 miles) south-east of Kamiashi at a depth of about 36km, the US Geological Survey said.

Miyagi was hit by a devastating earthquake and tsunami in March 2011.

Swaying violently
The US-based Pacific Tsunami Warning Center said there was no threat to the wider Pacific Ocean but that a tsunami could be generated that was destructive for local coastlines.

There have been no immediate reports of deaths or injuries.

Warnings of the tsunami height have varied between 50cm and 2m.

The BBC's Rupert Wingfield Hayes in Tokyo says any such height would represent a far lower risk of devastation than the 10-11 metre tsunami that struck in 2011 but that since then the country has clearly become jittery about any shaking of the earth.

At the moment, he says, the damage appears to be on a limited scale, although even a one-metre tsunami could be a significant event.

The tsunami alert extended from the top of the main island of Honshu down towards Tokyo and evacuations were ordered from some of the affected areas.

Buildings were reported to have swayed violently in Tokyo.

Communications to Miyagi have proven difficult, with the high volume of telephone calls. Trains in the prefecture have been halted and the runway at Sendai airport closed.

English teacher John Heritage, who is in Tagajo in Miyagi Prefecture, told the BBC the earthquake was not as powerful as some he had experienced but was worrying as it went on so long.

"We're now at an official evacuation centre with about 50 other people waiting to hear what to do next," he said.

Other people reported being alerted to the earthquake prior to its arrival by Japan's mobile phone-based warning system.

One tweeted that he was given 10 seconds and was able to slow his car before the shaking struck.

That quake triggered a meltdown of fuel rods at the Fukushima nuclear plant, causing radiation leaks and mass evacuations.

The plant's operator, Tokyo Electric Power, told Agence France-Presse there were no reports of problems there this time, although workers have moved to higher ground.
Posted by Unknown at 02:41