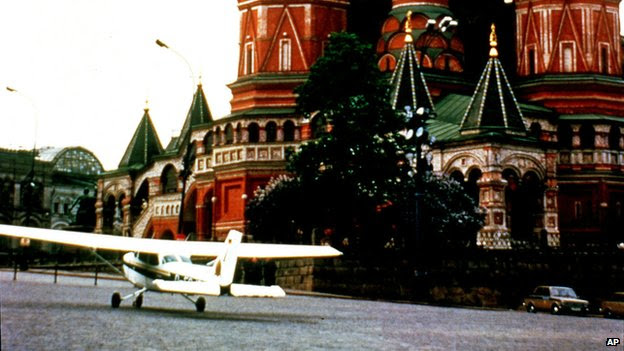 In 1987 a West German teenager shocked the world, by flying through Soviet air defences to land a Cessna aeroplane in Red Square. He was jailed for more than a year - but a quarter of a century later, he has no regrets.

Exactly 25 years ago, the USSR Foreign Ministry announced that it had rejected an appeal by a German teenager against his prison sentence.

Mathias Rust, just 19, had single-handedly flown more than 500 miles (750km) through every Soviet defensive shield in a single-engine plane to land at the gates of the Kremlin.

The idea had come to him a year earlier while he was watching TV at his parents' home where he lived in Hamburg, West Germany.

A summit between the US and Russian presidents in Reykjavik had ended in a stalemate, and the teenager who had a passion for politics felt he wanted to do something to make a difference.

Rust was sentenced to four years' hard labour
"I thought every human on this planet is responsible for some progress and I was looking for an opportunity to take my share in it," he says.

Rust already had a pilot's licence and had clocked up 50 hours in the air when it occurred to him to put his skill to use.

"I was thinking I could use the aircraft to build an imaginary bridge between West and East to show that a lot of people in Europe wanted to improve relations between our worlds."

Many idealistic teenagers may have had similar fantasies of bringing about world peace by performing daring acts. The difference with Rust is that he actually went ahead with his plan.

On 13 May 1987 he told his parents he was going to tour northern Europe in a Cessna airplane in order to clock up hours towards his professional pilot's licence.

His first stop was in the Shetland Islands, then the Faroe Islands. He spent one night in each.

Next came the capital of Iceland, Reykjavik, then Bergen in Norway before he arrived on 25 May in the Finnish capital, Helsinki.

He spent several days there trying to decide if he really had the courage to go through with his plan. He had good reason to be nervous.

Archive footage of Mathias Rust landing in Red Square
The USSR had the largest air defence system in the world. Less than five years earlier, a South Korean civilian airliner had been shot down after straying into Soviet air space, causing the death of all 269 passengers on board.

"Of course I was afraid to lose my life," Rust recalls.

"I was weighing if it is really responsible, reasonable, to take this kind of risk. At the end I came to the conclusion, 'I have to risk it.'"

I am here on a peace mission from Germany”

Mathias Rust
Red Square, May 1987
On the morning of 28 May, he told air traffic control in Helsinki he would be heading to Stockholm, in Sweden. Even then he wasn't completely sure he would go through with it.

"I made the final decision about half an hour after departure. I just changed the direction to 170 degrees and I was heading straight down to Moscow," he says.

Back in Helsinki, operators at air control began to worry. Rust was heading in the wrong direction and then vanished from their radar screens before they could make radio contact.

An enormous manhunt was launched by the Finnish coastguard and when a patch of oil was spotted on the sea surface, divers were brought in to search for a wreck.

While they were hunting for him, Rust was sitting snug in his cockpit as his plane crossed into Soviet airspace, over Estonia.
Posted by Unknown at 02:43