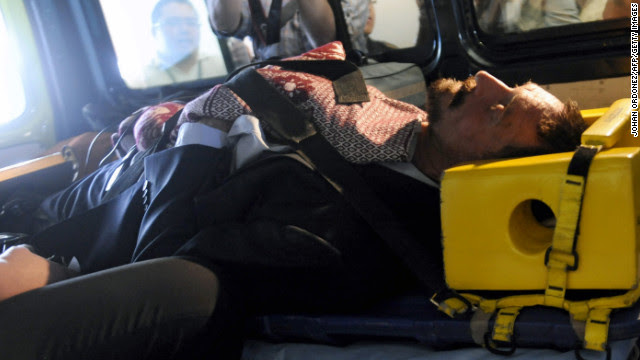 Guatemala City (CNN) -- The next stop for software pioneer John McAfee could be Belize after Guatemalan authorities rejected his bid for asylum.
Authorities there want to talk to him about the November 11 shooting of his neighbor, American businessman Gregory Faull.
Under Belize law, McAfee can be held for 48 hours without charges, police spokesman Raphael Martinez said.
But McAfee's fight to stay in Guatemala is not over.
His attorneys said they filed a request for an injunction with Guatemala's Supreme Court to prevent his extradition.
Standing outside the police hospital as ambulance lights flashed nearby, attorney Karla Paz said officials had unjustly rejected McAfee's petition without weighing the evidence.
McAfee seeks asylum in Guatemala Runaway software tycoon arrested
"Due process has been violated. The right to defense has not been respected," she said.
Read more: McAfee's exit from Belize ends in detention
McAfee is being held in a Guatemalan immigration detention center while developments swirl.
On Thursday, a neon green ambulance whisked the 67-year-old to a police hospital just hours after his bid for asylum was rejected. McAfee's legal team said doctors were treating him for cardiovascular problems.
Later, attorney Telesforo Guerra offered a different diagnosis: McAfee had suffered a nervous breakdown, but tests showed he did not have heart problems.
The series of events were the latest dramatic twists in a saga that reads like a best-selling mystery, with poisoned dogs, a dead neighbor and international intrigue fueled by weeks on the run.
Guatemalan authorities took McAfee into custody Wednesday on accusations of entering the country illegally.

After weeks in hiding, the anti-virus software company founder emerged publicly Tuesday in Guatemala's capital, hundreds of miles from the Caribbean island in Belize where his next-door neighbor was found dead.
McAfee requested asylum in Guatemala, arguing that he left Belize to escape police persecution.
But Guatemalan authorities found there was no basis for his asylum request, presidential spokesman Francisco Cuevas said Thursday.
McAfee founded his namesake computer security software in 1987, initially running it out of his home in California. He sold his stake in McAfee Associates in 1994 and moved to Belize in 2008.
On November 9, he told police someone poisoned his four dogs there. To put them out of their misery, he shot each in the head and buried them on his property, according to a former girlfriend.
The dogs' barking and aggressive behavior was a frequent source of friction between the two neighbors.
Read more: A bizarre visit to John McAfee's pleasure palace in Belize
Two days after the dogs were poisoned, Faull was found fatally shot in the head.
McAfee has said he had nothing to do with Faull's death, and Belize authorities are out to get him because he refused to pay a bribe to a politician months earlier.
Belize police say they only want to talk with McAfee.
"He's really gone out of his way to make the country look bad," Martinez, the police spokesman, said earlier this week. "We just believe he should, if he's innocent as he's saying he is, he should bring in his lawyer, and let's get to the bottom of this and say what he needs to say and let's move on."